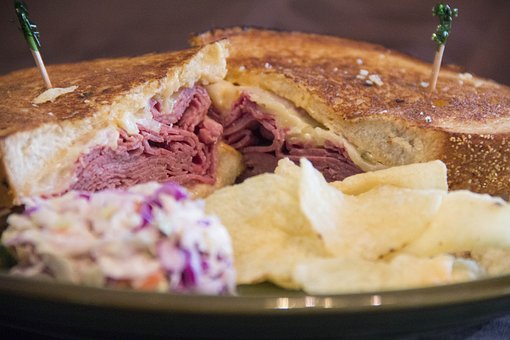 The top delis have an adjoining bakery that sells authentic bagels, bialys, rolls and biscuits, together with take-out sandwiches and foods. Some of the old timers such as the Stage Deli and the Carnegie Deli have gone the way of the dinosaur (go figure) but a few still prosper, particularly in NYC, Chicago and of course Miami. We are not talking sandwich or sub shops here, we are talking honest-to-gosh authentic delis where you would swear grandma was making matzo balls in the kitchen. Here’s What you can expect to see if you venture into an excellent one:

Lox and bagels or bialys, with or without a schmear of cream cheese (if they do not serve them, you made a wrong turn and you are at Subway)

A comforting bowl of matzo ball soup – a mild dumpling made with matzo meal in chicken broth, or kreplach, a milder meat-filled dumpling

Borekas – stuffed pastries made of a thin flaky phyllo dough and filled with spinach, cheese or occasionally meat (also a Greek dish)

Shashuka – hot dish of eggs poached in a sauce of tomatoes, chili peppers, and onions, often spiced with cumin

Brisket and pastrami sandwiches – best served hot on Jewish rye with lots of mustard, coleslaw on the side

Blintzes – usually fruit fill and served with sour cream, like a crepe

Potato salad and coleslaw – the perfect side dish, creamy and lots of it

Matzo breh – pieces of matzoh lightly sauteed in butter and scrambled with eggs, the ideal breakfast

Chopped liver – usually a plate with a mound of chopped liver, accompanied by chopped onions, tomatoes, chopped egg and served with rye bread

Gefilte fish – not high on everyone’s favorites but a conventional white fish and part of a traditional holiday meal, served cold

Loaves of braided challah, a traditional sweet holiday bread which usually contains raisins, Much like a brioche

Many Jewish dishes of course have a similar version in neighboring countries like Poland, the Mediterranean countries and Russia, and many are part of a traditional holiday meal such as Passover. But what has evolved to the traditional delicatessen, with its mile high sandwiches, matzo ball soup and chopped liver is unique unto itself. The waiters are rude and hurried, the portions are big, and the clients are hungry. What’s not to like?